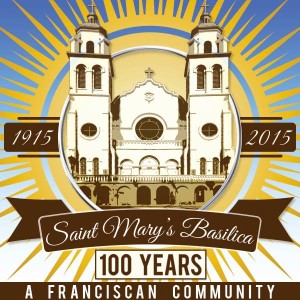 The Church of the Immaculate Conception of the Blessed Virgin Mary (St. Mary’s Basilica) is the oldest Catholic parish in Phoenix and was the only Catholic parish in Phoenix until 1924. It is the second oldest church in Phoenix with the First Presbyterian Church, organized in 1879, being the oldest. The beginnings of St. Mary’s looked to the private residence of Mr. Jesus Otero located at First Avenue and Washington Street. From 1872 until 1881 priests from Florence, Arizona traveled by buggy every three months, to conduct the Catholic liturgy.

Construction of a church on the present site of Third and Monroe Streets began in 1880 under the supervision of Rev. Edouard Gerard. Rev. Gerard was the first priest ordained (February 2, 1877) in Arizona. The church was built of adobe, 60’ x 40’, with a steeple pitched, shingled roof. With its completion, the church was dedicated by Bishop Salpointe on June 24, 1881. Rev. Joseph Bloise, the first resident priest, came in 1825. His successor, Rev. Francois X. Jouvenceau, came in 1887.

In December 1895, at the invitation of Bishop Peter Bourgade, the Franciscan Friars agreed to accept responsibility for the church the arrangement was signed by Rev. Michael Richardt, Provincial of the Sacred Heart Province headquartered in St. Louis. Rome insured Franciscan permanence in Phoenix by granting the Beneplacitum Apostolicum (papal approval) on January 7, 1896: The first friars arrived on January 12, 1896.

By 1902 the adobe church was in need of major repairs and enlargement.  The current pastor, Fr. Novatus Benzing, O.F.M., received permission from his superiors to proceed with construction of a new church.  The new church would need to be constructed in two phases due to budget constraints.  The adobe church was razed and construction began on the basement which would serve as the “basement church” until the upper church could be completed.  The architect was Br. Adrian Wewer, O.F.M., assisted by Br. Leonard Darched, O.F.M.  The local architects were R.A. Gray and George Gallagher.  The “basement church” (now the social hall) was dedicated on February 11, 1903 under the patronage of the Immaculate Heart of the Blessed Virgin Mary by His Excellency Bishop Henri Granjon of Tuscon.

On September 6, 1976, St. Mary’s was named an historic site by the Arizona Historical Society.  An on October 17, 1977, the church was added to the State Inventory of Historic Places of Arizona.  St. Mary’s was placed on the National Register of Historic Places on November 29, 1978.  On September 2, 1985, His Holiness Pope Saint John Paul II solemnly proclaimed the church of the Immaculate Conception of the Blessed Virgin Mary to be a Minor Basilica.

While on his American visit, His Holiness John Paul II (now Pope Saint John Paul II) visited St. Mary’s kneeling in prayer in the center aisle and speaking to the crowd from the balcony on September 14, 1987.  The people of Phoenix voted St. Mary’s as a “Point of Pride” in the city in 1993.